Stop #1 on my Alberta Craft Beer Roadtrip was in at Oldman River Brewing in Lundbreck, Alberta.

Located just off the Crowsnest Highway in southern Alberta, Lundbreck – a hamlet of 236 people – is home to Oldman River Brewing, named after the river that flows north of the hamlet. 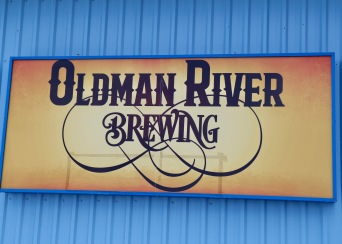 Open since the summer of 2017, Oldman River Brewing offers four core beers as well as seasonal selections. Of the core lineup, Saint Joe’s Abbey Style Brown Ale is a standout. It is a smooth brown ale that packs a moderate wallop at 7% ABV. It’s a brown ale that is full of bread and malt flavours that is very easy to drink. It was the star of the day, and is Oldman River’s first offering to be bottled. Also on tap is a blonde and a lager, both true to style and quite enjoyable. Unfortunately, the Oldman River Pale Ale was tapped out so I didn’t get a taste of it.

The seasonal selections were a mixed bag both in terms of style and quality. They included a Table Beer, Walter Brown Ale (pictured below), and a Bourbon-Aged Vienna Lager.

The Vienna Lager, which I was looking forward to, was disappointing because of its lack of carbonation. There was a prominent bourbon aroma and taste in the beer, but the absence of carbonation let the beer fall flat – literally. The other two seasonals were enjoyable, with the Table Beer being the highlight. It is light while still having a peppery, full-flavoured taste.

The taproom itself is welcoming and reminiscent of everyone’s uncle’s garage, with fishing paraphernalia strewn on the walls, including a jackalope and a swordfish (which I have serious doubts was taken out of the Oldman River) mounted above the door as you walk in. The fishing theme is continued with the fishing reel tap handles that stand along the bar.

Depending on the food you order, it is either made in-house or brought in from other small business in the town and surrounding community. Along with a menu of typical pub fare, there is pizza that is brought in from across the street (made by the aptly entitled Lundbreck Pizza) and there are pies from by Jason the Pie Man in nearby Blairmore. Having small businesses work so openly together is admirable.

Oldman River Brewing is a kid-friendly establishment that offers flights, pints and growler fills. There is a small merchandise section of shirts, hats, and glassware. However, what Old Man River truly offers is a welcome respite from the road when traveling the Crowsnest Highway. I recommend getting a glass of St. Joe’s and indulging in the wares of Jason the Pie Man if you’re ever passing through.